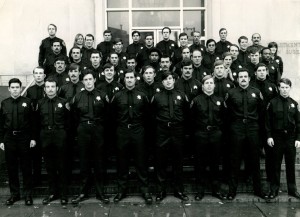 In 1972, I joined the San Francisco Police Department and moved into a beautiful apartment in Diamond Heights with a dramatic view overlooking the City. It was a solid Civil Service career job, but I deeply missed football. The childhood dream to some day quarterback the 49ers ended — the victim of a lack of talent. Dreams of an NFL career at that point I figured were long gone.

Then Destiny and Fate intervened.

Rosemary, who would become my wife, gave me a 35mm SLR camera for my 23rd birthday. I took the camera to work on the midnight watch at Park Station in the Haight-Ashbury district where I would take snapshots of the guys. Then in the early morning hours, I’d drive up to Twin Peaks and shoot the fog and sunrises over the City.

Those were rough and dangerous times in San Francisco with Zodiac, the Zebra Killers and Patty Hearst and the SLA. Photography became a way to balance my life by forcing me to see the beauty and uniqueness of the world through the lens of my camera. 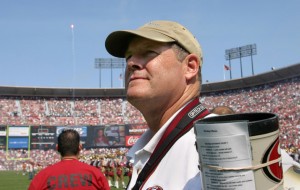 Meanwhile, two guys on my watch at Park Station were in charge of the SFPD Field Security detail for 49er games at Candlestick Park. They’d seen my camera and me and knew how much I loved football.

But I paid attention, mindful to where the real photographers were positioning themselves. Soon I got the feel for trying to follow the action through the camera viewfinder and releasing the shutter at just the right moment to capture the peak of action moment. It was an epiphany! 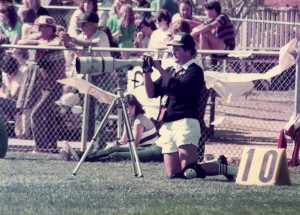 That afternoon, I intuitively knew I’d found the vehicle I needed to fill the football void in my life. The next week I emptied my bank account and bought a bigger lens. To improve my skills I photographed high school football games. Gradually I improved and the quality of my images became salable to players, parents and newspapers.